What is a Kamikoto Knife? 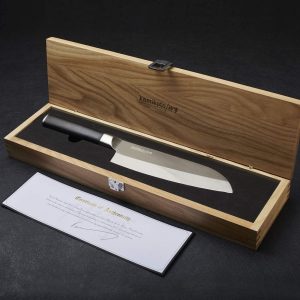 Kamikoto Chef’s Knives are crafted by hand from top quality Japanese steel using traditional techniques passed down through generations of top Japanese knife makers. For more than a thousand years – top craftsmanship have inspired the final version of Kamikoto knives. Meticulously crafted by hand, each Kamikoto blade features superior quality steel from Honshu, Japan which is a steel with extreme corrosion resistance and durability. The Kamikoto Knife is rigorously quality tested to make sure it meets the distinction and calibre of Kamikoto. One of the most popular Kamikoto product is the Kamikoto Kanpei Knife Set.

Kamikoto chef knives are undoubtedly one of the top desired knife of traditional Japanese knives. The knife’s single-bevel blades take some finesse to get used to. Once you master this technique, the Kamikoto knifes deliver exceptional cutting power. You will love how incredibly sharp they are, and with a price that is in line with comparable other Japanese chef knife brands, the Kamikoto knives are a perfect choice for any kitchen.

Is a Kamikoto Knife worth it?

Every Kamikoto knife is made with high quality Japanese steel, forged in Japan and inspected rigorously. Users believe Kamikoto knives to be high quality and very much worth the price. In addition, they come with a lifetime warranty and a very cool handcrafted box.

Japanese cutlery such as Kamikoto Chef’s Knives are a great choice for the home cook. They can be used for a variety of tasks including slicing, dicing, chopping and mincing, making it easier to prepare food. Japanese knives are typically thin and lightweight, featuring a straight edge that is ideal for chopping and slicing. Kamikoto is a company that produces high-end Japanese knives that work well in the kitchen and have an attractive design.