What is a Genuine Gurkha Kukri Knife? 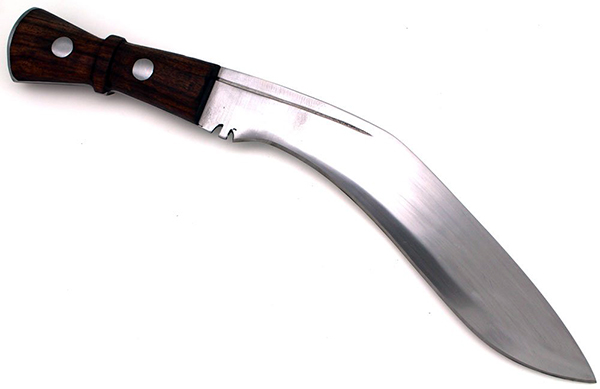 The kukri or khukuri is a knife blade originating from Nepal that has a curved shape, similar to a machete. It is usually used as a tool or weapon, and was historically the primary knife of the Nepalese population. This weapon is a popular choice for the Nepalese Army, the Royal Gurkha Rifles of the British Army, the Assam Rifles, the Gorkha regiments of the Indian Army, and all Gurkha regiments worldwide, which is why it is sometimes referred to as a “Gurkha blade” or “Gurkha knife”. The khukuri knife is also frequently seen in Nepalese heraldry and is utilized in many traditional ceremonies such as weddings.

A Genuine Gurkha Kukri Knife is mainly employed for chopping and its shape differs greatly, ranging from slightly curved to strongly curved, with either smooth or sharply angled spines. Traditionally it includes two smaller blades, one is used for sharpening (the Chakmak) and the other is for more precise activities (the Karda, which means ‘small knife’).

The Genuine Gurkha Kukri Knife‘s blade size varies based on the purpose and area of manufacture, as well as the smith who made it. Generally, the spines are quite thick, from 5 to 10 millimetres (0.2 to 0.4 inches) at the handle, decreasing to less than two millimeters (0.1 inch) at the point. The average length of a standard-issue kukri is between 40 to 45 centimetres (16 to 18 inches) and it typically weighs between 450 to 900 grams (1 to 2 pounds). The blade of the kukri usually features a notch near the base, called a kauda, kaudi, or cho. People have come up with various theories to explain the purpose of the notch, one of them being that it is a symbol of Shiva, a Hindu deity who is devoted to the elimination of evil.

Handles of the Genuine Gurkha Kukri Knifes are usually fabricated from hardwood or buffalo horn, with a flared tailpiece that makes it easier to pull out, slash, and chop. These kukri knives usually have metal grips and end plates, usually consisting of brass or steel. They are usually presented in a wooden scabbard that is sheathed in leather and has a metal tip; this knife is usually carried upright at the back of the belt.